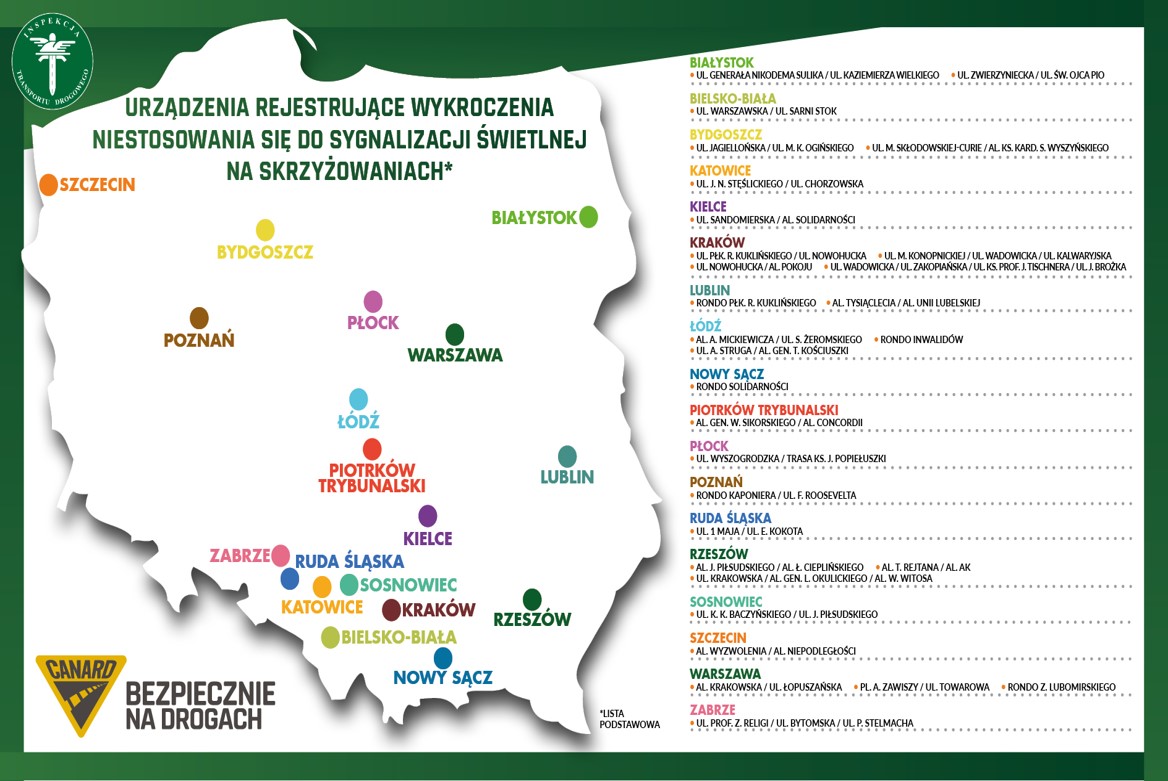 The expansion of the speed camera system in Poland is underway. Minimizing road fatalities is a priority in road safety improvement efforts. Exceeding speed limits by drivers is the main cause of accidents in Poland, so speed cameras are unquestionably the right tool to reduce it. In order for them to fulfill their task, it is necessary that they are properly placed and that the penalty for breaking the law is inevitable.

At the beginning of the year, the Chief Road Transport Inspectorate announced a tender for the purchase and installation of 26 speed cameras in the most dangerous places in the country. This is the next stage of the project to expand the speed camera system as part of the CANARD (Center for Automated Traffic Surveillance) project. As planned, it is to include the installation of 358 new recording devices throughout Poland, including 100 devices to be installed in new locations:

Expansion of the speed camera system in Poland

The expansion of the speed camera system is being carried out as part of the implementation of the project “Increasing the effectiveness and efficiency of the automatic traffic surveillance system.” The project is co-financed by the European Union, under the Operational Program Infrastructure and Environment 2014-2020. The expansion and modernization of the system will cover all categories of public roads.

The Motor Transport Institute, in an analysis of traffic safety it prepared, identified three intersections of Polish cities as most at risk of accidents and collisions: Mickiewicz Avenue and Stefan Żeromski Street in Łódź, Prymas Tysiąclecia Avenue and Wolska Street in Warsaw, Królowej Jadwigi Street and Kilińskiego Street in Nowy Sącz. In these three and 27 other locations in 18 cities, systems will be installed to record non-compliance with traffic signals.

During the analysis of traffic safety, such additional factors as the surrounding area, proximity to schools, public facilities, pedestrian infrastructure – sidewalks and bicycle paths, and public transportation were meticulously evaluated.

The installed devices will operate using video detection, which means that interference with the road surface will not be necessary. This will significantly contribute to the ease of installation.

What’s more, as Monika Niżniak, a spokeswoman for the General Inspectorate of Road Transport, told a press conference, “The devices will detect the fact of a vehicle entering an intersection at a red light, track the vehicle’s path through the intersection, and document the infraction committed, along with data allowing identification of the offending vehicle, as well as the circumstances of the incident (vehicle registration number, time and place of the incident, time elapsed since the red light was lit).”

Once this stage of the speed camera system expansion is completed, CANARD will conduct inspections at 50 intersections in Polish cities.

The second parallel stage of the project is the supply of 11 new vehicles with on-board equipment for recording traffic violations. These vehicles will be used to control in dangerous places, where, among other things, due to the course of the road and technical conditions, it is not possible to place stationary speed cameras.  After the completed procedure, CANARD will have 40 vehicles. This will significantly affect the flexibility of conducting ad hoc speed checks.

The total cost of implementing the project is: PLN 162 million, of which PLN 137.7 million comes from EU funds.